Andy Goldsworthy is considered the founder of modern rock balancing, an art that involves balancing rocks on top of one another. But Goldsworthy is more than a rock balancer. This British artist is also a naturalist, sculptor, photographer, and author of many books. Born in 1956, Goldsworthy was raised in Yorkshire, England where he spent much of his childhood outdoors. This is reflected in his sculptures which are made of materials found only in nature such as rocks, clay, snow, twigs, leaves, and flowers. Because he builds his sculptures outdoors where they are fully exposed to the forces of nature, his artwork is ephemeral. Just one gust of wind could completely destroy a piece of art that took hours or even days to build. However, Goldsworthy finds a way to overcome these forces; he uses photography to document his often short-lived sculptures in time.

Find a list of his books here.
This is a bibliography of his books posted by a fan. There are twenty total and may be a useful list if interested in purchasing or locating one of his books in a library. 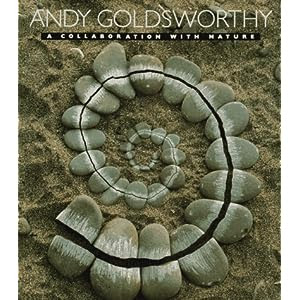 Documentary about Andy Goldsworthy.
This link allows you to access details, reviews, and a message board for the documentary film directed by Thomas Riedelsheimer - River and Tides: Andy Goldsworthy Working with Time. The movie was rated 7.9 by IMDB users!