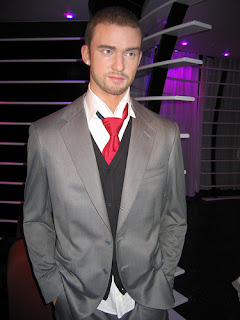 Justin Timberlake is a world famous American pop singer and actor. Timberlake was born as Justin Randall Timberlake on January 31, 1981 in Memphis, Tennesse, USA to Lynn Harless and Randall Timberlake. His first attempts in singing career were country music songs on Star Search as "Justin Randall," which he achieved early fame and went on to star in the Disney Channel television series The New Mickey Mouse Club. Timberlake became famous in the late 1990s as the lead singer of the boy band N'SYNC, which sold 11 million copies of this debut album, N'SYNC, in US. He made his acting debut in the Disney Channel movie Model Behavior in 1999. In 2002, N'SYNC ended and it performed at the Academy Awards, The Olympics, and the Super Bowl, as well as selling more than 50 million copies worldwide, becoming the third-best selling boy band in history.

During 2002, he released his first debut solo album, Justified, which sold more than 7 million copies worldwide. The album was a success, by having two popular songs, Cry Me a River and Rock Your Body. During 2004 to 2006 Timberlake put his recording career on hold to act in several films. In 2006, he released his second solo album, FutureSex/LoveSounds, where he was awarded two Grammy Awards. I personally love his songs because I feel they are amusing to listen to and I inspire the lyrics, rhythms, tones, and tempo of most of his songs. I also realize he is very talented and coming up with new songs that are attractive to listen. Over his years of being a pop singer, I find him diligently working on making his music pieces a success.

Overall, Timberlake has won six Grammy Awards and two Emmy Awards, his first two albums made him one of the most commercially successful singers in the world, each selling 7 million copies. He also has an acting career , while his other ventures include record label Tennman Records, fashion label William Rust, and the restaurants Destino and Southern Hospitality. His talents of being a pop singer and actor is known throughout the world and has allowed him to become who he is today.

http://www.justintimberlake.com/
A Justin Timberlake website consists of his achievements of songs and videos on music, personal, or news. It shows general news about his recent activities and photos. There are also videos and a link to Justin Timberlake store. It shows tours and events that happened recently. Each of the topics listed have exclusive, music, tv & movies, sports, and fashion information listed under these topics.

www.imdb.com/name/nm0005493/
This website shows Timberlake's biography, a list of movies on his acting career, general tv episodes and clips, news about his movies and his personal life, and photos of movie scenes and events. There are more links on the bottom of the website to explore more about Justin Timberlake. Beside his biography it also shows his work on soundtrack, actor, and producer.

www.people.com/people/justin_timberlake
This website shows Timberlake's snapshots, five fun facts, biography, and photos. It also shows what times he is on tv, what channels, and the names of the tv shows or movies. There are also recent news about his activities, that are quite different than the other websites.
Posted by luckwishrule at 6:30 PM
Newer Post Older Post Home