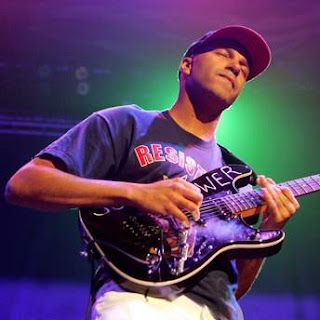 Tom Morello is a singer/songwriter/musician. He is most notable for his roles in bands such as Rage Against the Machine, Audioslave, and his solo acoustic act The Nightwatchman. Morello is easily identified by his use of effects in his playing, using different sounds and processors to create totally new and innovative sounds that make the guitar sounds like a completely different instrument. Most of the musical acts that Morello has been in have been politically charged (especially Rage Against the Machine), and have performed at places such as the Democratic National Convention in 2000.

What really draws me to this artist is the way he plays the guitar and simply because of the kind of person he is. The kinds of sounds that Morello is able to produce are incredibly interesting, almost DJ-like in sounds, which nobody else is able to reproduce. He has created a whole new vast array of sounds and textures with the guitar that work perfectly within the music he plays. He is also a Harvard graduate with a degree in political science, which speaks to me in a way that not many other rock musicians do, considering he has obtained a degree at such a prestigious school while still touring and playing in many highly popular bands. Because of this, I give weight and equity to his political views and ideas, which are easily heard throughout his music.

This is the official site for Morello’s Nightwatchman act. Fans can learn all about his music as well as the groups and organizations he supports.

This is a youtube video of Tom on MTV demonstrating to the audience some of the cool sounds he can make on the guitar, as well as explaining how he creates them.

A quick overview of Tom Morello including some of his most popular songs and bands that he has played in. Although short, the site touches on some of his most notable achievements and music and is good for getting an idea of what his music is like.