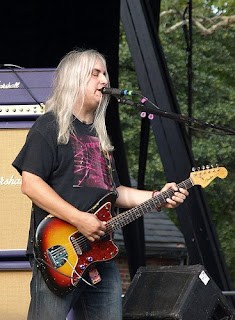 My artist of choice is musician J Mascis. He is a solo recording artist and frontman for 1980's indie rock band Dinosaur Jr. He is considered largely responsible for bringing the lead guitar back into independent rock. His self aggrandizing song writing, high gain, wall of sound style helped lay the ground for the breakthrough of alternative rock in the 1990's. Early releases were more structurally experimental, often veering off into free form noise before being brought back by his Neil Young inspired vocals. He later settled into a more predictable but still satisfying pattern, using Dinosaur Jr. and his solo work as a vehicle for songwriting rather than experimentation. His more recent writing has lacked the self-hate of his previous work, instead reminiscing over how his past problems have made him into the person her currently is. He is considered one of the most influential guitarists in modern rock.
His slowly evolving style has, over the past twenty years, given his listeners a unique portrait of who he is as a musician and a person.
http://www.subpop.com/artists/j_mascis
He is currently signed to Sub Pop records. This gives a brief introduction to him as an artist and talks about his new album.
http://jmascis.com/bio/
This is off his official website and gives a longer artistic history and focuses less on current work.
http://www.allmusic.com/artist/dinosaur-jr-p4096/biography
This is about the history and influence of his band, Dinosaur Jr. It traces their history to the present day and features comments about their effect on popular music at various points in their career.
Posted by Andrew Baer at 10:07 PM
Newer Post Older Post Home