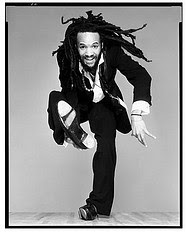 Today Savion Glover may be known for his tap dancing roles in pop culture hits such as Happy Feet, and Sesame Street. However, Savion is one of the leading tap dance performers and choreographers. He began playing the drums at the age of four. By the age of seven he wanted to start putting those rhythms to use with his feet, and quickly picked up the style and moves of tap dance. His first big role was the lead in Tap Dance Kid. After this role, word spread about this young prodigy. He was asked to play a role in a new show titled Black and Blue. While over in Paris performing Black and Blue he was able to connect with older tap generations. These experienced tap dancers passed down the history and their individual styles to Savion. These mentor-ships continued throughout his career. He was taught by some of the most well known performers such as Gregory Hines and Sammy Davis Jr. When he was a teenager he opened up his own dance school, HooFeRzCLuB School for Tap in his home town of Newark, New Jersey. In 1996 Glover choreographed and led a main role in the production of Bring in Da Noise Bring in Da Funk.  This show went on to win a Savion his first Tony award.
Savion is important to the world of dance because he has brought back the original styles of Tap as well as working to keep the art form alive. He ties African American history into the storyline of his performances. He also likes to be new, innovative, and show that dance can be taken to the next level. He was the first to introduce a funk style to tap and to Broadway. To him tap is a self expression of your emotions not just an exercise.  One quote that stood out to me was that, "The beat is basically what takes you through life,” when asked what his approach to dance was.   Once you see him perform onstage you see that it’s not about the presentation and the costumes, it’s about his hard hitting sounds and the rhythms he creates. His goal is to keep dancing alive and pass down all of the knowledge and unique styles of past generations of tappers.
http://www.colbertnation.com/the-colbert-report-videos/343142/august-05-2010/savion-glover
This first link is to a video of Savion on Steven Colbert’s show. It’s a humorous interview that shows Savion’s personality. He talks a little about the history of tap and his approach to the dance. At the end he does some tap demonstrations.  I would highly recommend watching the end of the clip to see the amazing rhythms and sounds he is able to create.
http://www.answers.com/topic/savion-glover
This website gives a very extensive biography of his life, accomplishments, and awards.  The background history is very detailed and the lists of his performances and appearances are accurately compiled.
http://www.facebook.com/pages/Savion-Glover/134004443334838?sk=info
This is a link to Savion’s official facebook page. It gives some background history and some basic information. On the wall it shows some of his upcoming performances as well as some videos of performances.  You can see how many fans look up to him. It also has links to his website and the site for his dance school.
http://www.youtube.com/watch?v=DpIu-R-1ej0
This is a link to a youtube video showcasing some of Savion’s amazing talent. It is worth the watch, this short clip demonstrates the amazing sounds and rhythms patterns as well as his over artistic ability.
Posted by Arika S at 11:09 PM
Newer Post Older Post Home