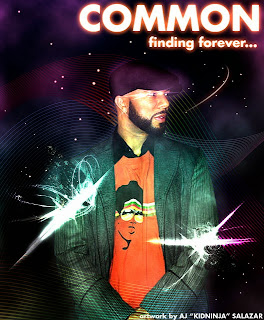 http://www.thinkcommon.com/
This is Common’s official website. It provides information on his latest releases and news updates. It also provides links so that you can purchase gear, music, or tour tickets. This is the first site that is updated when new information is provided. There are links to his social media platforms (Facebook, Instagram, youtube, twitter, etc.) and provides news updates. This site provides the basic information on what he is doing and how to purchase memorabilia.

http://www.rollingstone.com/music/artists/common/biography
This site provides a biography of Common and discusses his transformation from a young Chicago kid to an award-winning musician and actor. It shows a timeline of his career, reviews of his work, and provides news updates.  The site also provides photo and video galleries.


Here is a collection of some of Common’s greatest poetry readings with Def Jam poetry. These recitals provided artists to comment on their situations.  The artists were given a platform to discuss many topics from institutionalized racism to faith in god. This shows how he is active within the African American community and how he takes stands on political issues

I find Common interesting because he is a multifaceted artist and actor who is continuing to push himself musically and as an actor. He has not shied away from political controversy if he felt it would benefit people who do not have the voice to speak up for themselves.  As a musician he has been known as “a conscious” rapper who uses music to help empower people. The words and subjects he chooses to use help depict the plights of the ghetto. Recently, he won an Academy award and a Golden Globe award for his song “Glory” with John Legend. The song was the theme song from the 2014 film Selma, which portrays the 1965 Selma to Montgomery marches.  Common has not been shy to express his opinions on political injustice or racial inequality. He appeared many times on Def Jam poetry which gave artists the platform to address our societal flaws. He was recently received a large amount of criticism over some of his past songs (criticisms of George Bush and "cop-killer" lyrics) after he was invited to the White House for an “evening of poetry.”  Common has also acted in twenty-five films and seven television programs.  He has stated that he is in pursuit of an E.G.O.T. (Emmy, Grammy, Oscar, and Tony awards) which has only been done by twelve people in acting history.  This is compelling to me because it shows his versatility as an artists.  He started as an MC/poet and he has been able to grow and develop into a producer, actor, and role model.  He is inspirational because through his work he has been able to create a difference for the disenfranchised.
Posted by Unknown at 2:00 PM
Newer Post Older Post Home