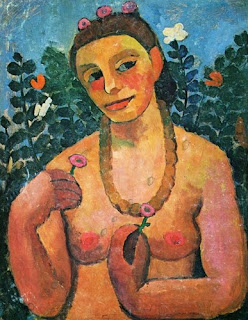 Art history is dominated by male artists and their works, while women’s work has consistently been marginalized. Paula Modersohn-Becker stands out a prominent female artist associated with German Expressionism at the turn of the twentieth century. She is credited with being one of the first women to paint the female nude, including self-portraits during her pregnancy, and depictions of nude women with their children. Her work was incredibly important because it represented a new vision of the female body, as only a woman can understand it. Aside from her art, Modersohn-Becker broke away from the role that women at the time were expected to play. After marrying fellow artist Otto Modersohn, she continued to focus on painting, instead of solely performing domestic duties, as was norm for women of her class and time. In fact she moved from the Germany countryside to Paris without her husband in order to focus on developing her art. Aside from being an important artist in the modern movement, I chose Paula Modersohn-Becker because she challenged the role of women and showed her viewers a new perspective of the female form. 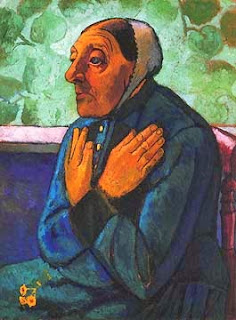 Works-- This site provides extensive images of her works, listing each piece’s name, date completed, and location.
Biography-- This article give a great biography of Modersohn-Becker. In addition, it provides context for her work within the larger framework of German Expressionism and modern art.
Personal Identity-- This article explores how Modersohn-Becker found success as an artist while contemplating her other identities as a women, a wife, and a mother.