The year was 1982, the band was KISS. During the cold aftermath of guitarist Ace Frehley's ousting from the band, a new axe slinger was needed to take his place. This man was Vincent Cusano, better known by his stage name "Vinnie Vincent." 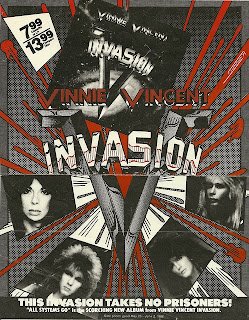 Since I was a young man, Vinnie has been a point of fascination for me. I remember the warm June night where I first stumbled upon an old video of him playing on Youtube.

The over-the-top wardrobe, the unapologetic shredding, the screechingly high vocals, the pyramid of amplifier cabinets, explosions and men running around on fire; this was the most 80s thing I had ever seen at the time, and I loved it. From then on, I was hooked, joining forums and reading interviews just to find out more about this illusive guitarist. Beyond the over-the-top lead playing and borderline graphic lyrics, what lied at the core was an extremely talented songwriter, yet also a recluse. Vinnie's first wife was murdered, his daughters had left him, and his state of affairs was really quite sad. In more recent news, Vinnie Vincent has been auctioning off his old stuff from guitars all the way down to belts for astronomical prices so he can afford to pay off his legal bills for his many royalty lawsuits against KISS. In spite of this, I'm still a huge Vinnie Vincent fan. Plus, crazy people are so much more interesting to read about.

Probably the most resourceful site in gathering Vinnie intel, Vinnie Vincent Fan Forum (formerly DoubleV) is composed of new and old Vinnie fans alike. Many of these men and women were lucky enough to see the Invasion on tour during their brief tenure in the late 80s, and several of them have even met Vinnie Vincent himself. Others are corresponding with him, though this is very hush-hush. As stated earlier, Vinnie Vincent is extremely reclusive and paranoid. He'll occasionally stop in on a few different accounts; where he'll have conversations with himself as several different people, praise himself, and generally cause mischief. This is a great forum with great people and my one stop shop for all of my Vinnie Vincent news. Everything from guitars and amplifiers used in the studio and on tour to who played keyboards on a certain track but was uncredited, these people know their stuff.


Founded by Tennessee native Chris Czynszak, Decibel Geek is another great resource for all things hard rock and heavy metal from the Eighties onward. On top of blog posts regarding hard rock and heavy metal, Decibel Geek also runs a very informative podcast about the same topics. Part of what makes Decibel Geek a great resource for Vinnie Vincent is their exclusive interviews with ex-VVI band members. They've done interviews with drummer Andre LaBelle, who played on several unreleased demos by Vinnie Vincent, vocalist Robert Fleischman who sang on the first Invasion album, and of course vocalist Mark Slaughter who sang on All Systems Go and toured with Vinnie Vincent Invasion for the first two albums (Mark Slaughter is perhaps best known for forming the band Slaughter in the early Nineties).  Their interviews with people whom worked closely with Vinnie gives excellent insight into the behind-the-scenes goings-on with the illusive artist.

Home and haven for all KISS fans, KISSFAQ is another fan forum dedicated to the broad topic of KISS.  Since the band has been around for over forty years and gone through several line up changes and phases (makeup, no makeup, etc.), the amount of information on band members is dense.  With this rich history, a portion of it accounts for the time Vinnie Vincent spent in the band, and the best place to find information for that is on the forums.  These men and women recount tales of meeting Vinnie, seeing him live either with KISS or with the Invasion, and other Vinnie related stories, such as spending a good deal of money on a box set that never showed up.