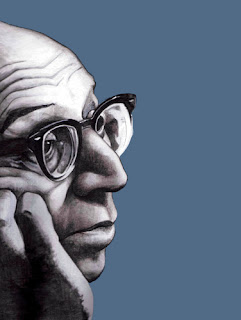 
Take a few minutes and list a few American composers. There aren't many the world recognizes as part of that ever elusive list of "Great Composers Everyone Should Know" - with one exception - Aaron Copland. His music has made classical music more known and accessible to the average American and beyond. Some of his most famous works ("Fanfare for the Common Man," "Appalachian Spring" and "Rodeo") are wellknown and part of standard repertoire for ensembles everywhere. His music reflects the American spirit and transports his audience to a different time.

Wikipedia's page on Aaron Copland is long and requires a dedicated reader; however, PBS in six short paragraphs here, examines where his purpose would take music and how he left his mark.

The Library of Congress catalogued all things Copland: from letters to essays written by Copland himself. Besides letters being a gateway into his more personal life, the essays he wrote for various publications sheds light on what drove him as a composer. Unfortunately, his handwriting is illegible.

The Copland House is dedicated to continuing his legacy, first by keeping his music alive by playing throughout the United States, and secondly, by encouraging American composers through the Aaron Copland Awards.