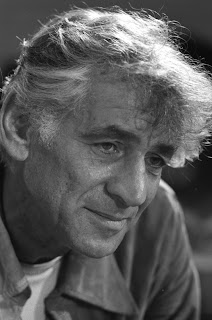 When you ask the musical world for their opinion of who their top conductors all time would be, almost anyone who answered would mention prominent composer/conductor Leonard Bernstein. He is one of my personal favorite composers as well as someone I watch frequently to learn more about how I can improve my conducting. He conducted many famous orchestras including the New York Philharmonic and a myriad of other top tier orchestras as well. As a composer, his works are mostly cheery, having almost a bouncy feel to them. There is so much emotion in his works that listening to each one is like sitting down for a three course meal as opposed to other pieces by other composers exhibiting less emotion, more like a trip to Wendy's. One of my favorite pieces to play by Bernstein is his Chichester Psalms.
http://www.youtube.com/watch?v=LCOBWxUZ
bmA
In this recording of the second movement, Bernstein is conducting the Polish National Radio Symphony Orchestra in 1989. The piece already has so much emotion, but just watching Bernstein conduct it is powerful. It is an example of him really pulling the emotion out of the musicians. Some of his other works include Westside Story, Overture to Candide, Waltz of the Flowers, and España to name a few. I highly recommend listening to his works, they fill me with joy as I listen and always have that ability to put a swing in your step. As a conductor, he is brilliant. He has a way of communicating with the orchestra that is rivaled by very few. It is always clear what he wants to be expressed and has a way of pulling the emotions out of the players. Most recordings of symphonies that are conducted by him are absolutely incredible.
He was really a jack of all trades. This is shown by another Youtube video of him conducting Rhapsody in Blue... While playing the piano part at the
same time. The man was a musical genius.
http://www.youtube.com/watch?v=xxb7yNG0DGc
The reason I chose Bernstein was because he is almost a hero to me. His contributions to the musical world as a composer, educator, conductor, and a person are on top as one of the most influential ever. He was not supported musically early on by his father and had to really fight and work hard to support his own musical growth. To watch someone as brilliant as Bernstein achieve his dreams on his own without much support amazes and inspires me. Not only did he overcome the lack of support and furnish his own success as a musician, but he became one of the most notable musicians in the world. His story really is proof that if you can dream it, you can do it. 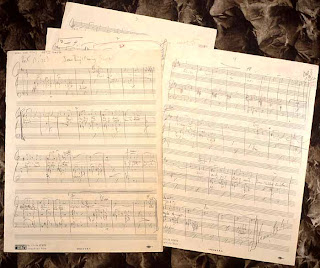 http://www.leonardbernstein.com/
This website gives an in depth look at Bernstein from a couple perspectives: person, educator, composer, and conductor. It also has news and a shop to buy his compositions and recordings. It is basically an all-around everything Bernstein site.
http://www.classicalnotes.net/features/bernstein.html
This website gives a look into his biography as well as his achievements. It places him above everyone else in the conducting world as the greatest conductor.
http://www.notablebiographies.com/Be-Br/Bernstein-Leonard.html
This is another biography of Bernstein. Provides a few more details about his life not found on some of the other sites. Provides links to more sites with more information
Youtube.com
This site shows Bernstein's Genius in action as well as recordings of his compositions and other various performances.
Posted by bertthegorilla at 1:22 PM
Newer Post Older Post Home