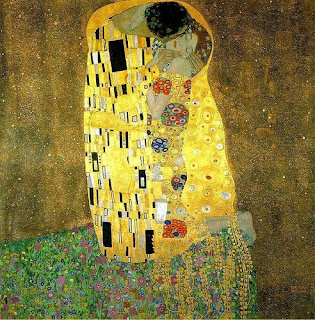 The Kiss, 1907-08
Light background:
Austrian artist, Gustav Klimt's work in the early 1900's exemplifies the transformation of popular art style between the old art of the nineteenth century and the new art of the twentieth with a strong theme of 'sexuality in art'. Klimt's early career in the late 1800's was based mainly on commissions; however, this stage came to an end when he presented the commissioned, Philosophy to the Ministry of Culture and Education, whose congress deemed Klimt guilty of pornography and excessive perversion. Despite this controversy, Klimt's work grew to be highly appreciated by the general public and Klimt was soon considered a favorite portraitist by women of the time. Interestingly, Klimt approached a new work by first painting women naked, before adding their clothes over the top - this is thought to be a rebellious step against the hypocritical Victorian repression of the age.
For further information on the life of Gustav Klimt, please see the links below. 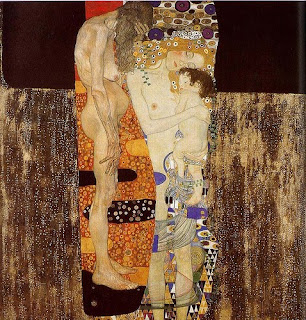 I first began delving into the works of Gustav Klimt when I came across a set of old, matted postcard-sized prints in a basement sale in Seattle. The kaleidoscope auras he uses to surround the subjects were fascinating to me: I could almost sense the opinion Klimt held for each subject by the colors and shapes he chose to surround them with. These features, paired with the awkward positions of the people he portrays forces me to spend minutes just looking at the paintings, unwinding the details before I can begin to think about their meaning. Though most of the meanings of Klimt's works are beyond my comprehension, I cannot help but love his blending of reality and fantasy.

http://www.iklimt.com/ - Gustav Klimt: His Life and Work
A simple site with (ignoring the occasional typo and grammatical error) interesting highlights of Klimt's personal and professional career displayed in an interesting, interactive form.

http://www.expo-klimt.com/1_4.cfm - Klimt Online Museum
A long list of many of Klimt's work with information for each including the titles in original languages, dates and media used.

http://www.ibiblio.org/wm/paint/auth/klimt/ - WebMuseum: Klimt, Gustav
A summary of Klimt's professional career including information on some of his most famous works.