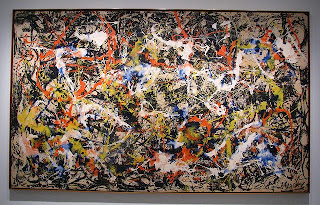 Jackson Pollock was an American painter who lived from 1912-1956. He began studying art under regionalist painter Thomas Hart Benton at the Art Students League in 1929. Many classify him as an abstract expressionist. He is well known for his unique style of dripping and splashing enamel paints on the canvas without a definite subject matter but this style did not emerge until 1947. Prior to using the all-over style that he is best known for he painted in a style similar to regionalists but was also influenced by Mexican and Native American art throughout his career. 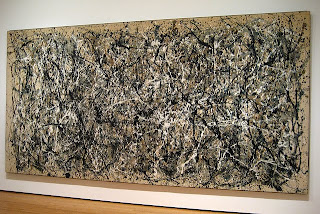 I do not have a lot of background in the arts and am more comfortable dealing with mathematical equations and Excel (spreadsheets) but abstract art has always intrigued more than other form of painting. In particular, Pollock’s works interested me because of his technique. If you look at one of his paintings you could certainly equate it to chaos and many have but when you take into account the overall size of his paintings and the consistency throughout the paintings, chaos as a description of his works quickly disappears. You can certainly try to interpret what emotion Pollock was trying to display in his works (he was a believer in Jungian Theory) but to me his paintings are just beautiful and calming for some reason.

National Gallery of Art- Gives a more in depth history and biography of Pollock's work as well as quotes from other people about his art.

WebMuseum- Gives a brief biography and also shows some of his earlier paintings.

JacksonPollock.com- More information on Jackson Pollock and his art. This is also a great site to lead you to other resources that can give more information about Pollock.

jacksonpollock.org- At this site you can create computer generated drip and splatter painting similar to Pollocks.

Jungian Theory- Pollock was a believer in Jungian Theory. This is the Wikipedia page on the Carl Jung and his theory of the unconscious.

Pollock on Youtube- A quick video where you can hear Pollock talking about his methods and see him working on a painting (there are many other videos on Pollock if this one peaks your interest).