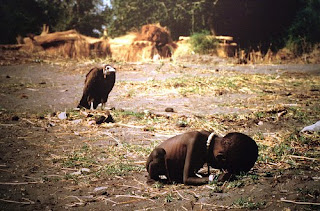 Though I have only seen a single photo from Kevin Carter’s collection, his name and that work will stay with me forever. The picture above depicts an emaciated Sudanese toddler trying to make her way to a feeding table; as she rested, a vulture landed and seemingly waited for her to die. The photo was first published by the New York Times in 1993 and won the 1994 Pulitzer Prize. Shortly after receiving the prize, Kevin Carter committed suicide by carbon-monoxide poisoning in his car stating reasons related to depression caused by the horrific and expansive cases of war, death and famine he had witnessed in his career.

In today’s media, famine is a common subject – so common that it can be hard to remember that the people depicted do indeed exist and are fighting everyday simply to survive. This piece of Carter’s collection was so moving to me, that I felt almost snapped out of that numb mindset. I chose to post it today with a hope that it may do the same for others.

http://www.fotoflock.com/index.php/learn-photography/history-of-photography/54-history/3406-kevin-carter-a-retrospective - An interesting collection of peer reviews and questions for a reader to consider while viewing Carter’s work.

http://www.time.com/time/magazine/article/0,9171,981431,00.html – a well respected resource for a published article outlining career highlights and lowlights, and the death of Kevin Carter.

http://www.flatrock.org.nz/topics/odds_and_oddities/ultimate_in_unfair.htm - A more extensive and personal biography of Kevin Carter.

http://www.kevincarterfilm.com/ - the official website for a documentary inspired by Kevin Carter’s suicide.