Danny Elfman
I'm sure many know who Danny Elfman is and everyone at least knows some of his work, even if you don't recognize the name. Danny Elfman is an American composer best known for his work in movies and television. Since I graduated high school I have become very interested in music and movies and really enjoy listening and comparing the different scores. I first became acquainted with Elfman's work in the movie Wanted, released in 2007. After that movie I started researching his work and discovered that he has wrote the music score for many of my favorite movies such as Good Will Hunting, Chicago, and many of the Tim Burton films. I was also surprised to find that he was a singer in the 1980's band Oingo Boingo. Danny Elfman has been composing for over thirty years and has one numerous awards for his work, needless to say he is a very talented composer and I encourage anyone to look into his work.
Here are a few websites to visit:
Elfman Film Music
This link will take you to Danny Elfman's film music website. This website will give you an entire filmography as well as samples of some movie scores. It also contains articles that you can read about Danny Elfman and his work.
Danny Elfman imdb page
This page will show every movie and television show he has worked with, including the Simpson's. It also gives his background information, including his family life. This website also gives information on his current or upcoming projects.
Oingo Boingo
This is a fan based page that was created by a fan and is not affiliated with the band Oingo Boingo. However, there is a lot of information you can find out about the band here including their history and music. You can even hear certain tracks of their music on this website. 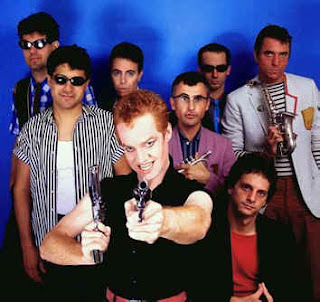 Here is a video of the main song from the 2008 movie Wanted. This song is called The Little Things by Danny Elfman
The Little Things
Posted by Derksb at 7:18 AM
Newer Post Older Post Home