Antony Gormley is famous in, "Exploring the relation of the human body to space and moments in time." He began by recognizing himself as a figure and building off himself creating sculptures with relative size to his own body (see picture above). With this, he began incorporating the art in all sorts of places and taking pictures to see how the figure would be portrayed at different viewpoints among the places he chose. Gormley created 31 body forms on sidewalks, riverbanks, and on top of roofs. His perspective was to create art in a common place people would be. He didn't want to make his work of human art seem like objects, but rather wanted to show how particular bodies sit relative to the space they're provided. I chose this artist because he didn't create normal art, he chose to make his art more meaningful in the sense that people can be seen as objects, but they are so much more than that. His art dives deep into the way people can be seen from near and afar and portrays a conceptual idea that humans are art by providing art based off the human being with various forms. Some forms include simple lines, detailed texture, high amounts of movement between spaces of the body and incorporating it all together to make a human figure with different shapes.

This site is useful in that it has a bunch of appealing artwork that Gormley created, as well as an introduction and overview of Gormley's most famous art. On this site you can even signup and purchase his art if it is as appealing to you as it is to me. This site also includes the prices which can range up to a couple million dollars.

This site is appealing in that it explores every aspect of Gormley's art. From sculpture to drawings it covers what Gormley indulged with his dramatic yet captivating artwork. This site also covers news articles about him, publications, and text, audio and videos of him.
3. https://www.britannica.com/biography/Antony-Gormley

This site is the most meaningful as it talks about Gormley's life and achievements as well as his upbringing in the art world. It also explores his sense of the human body and why he chose to make art from in object form of the human body portraying it in all sorts of ways to make it more appealing to the audience observing it.

Here is a picture of one of Gormley's most famous art pieces, "The Angel of the North" 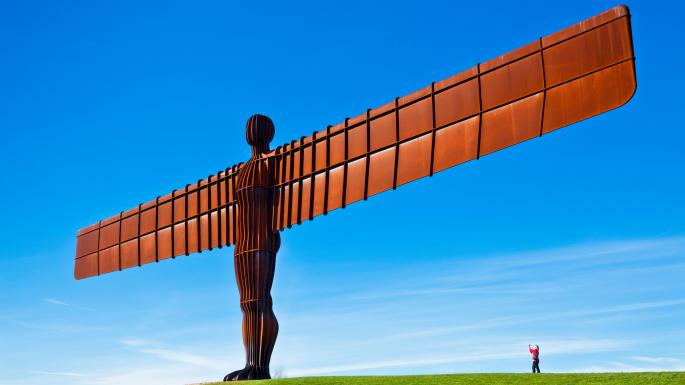