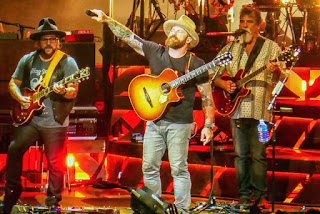 Zachary Alexander Brown was born on July 31, 1978. He was born and raised in Atlanta, Georgia, along with his eleven other siblings. The band itself was established in 2000. Later renovations of the group led to its expansion. In 2004 they ended up adding a violinist and a tenor vocalist to their lineup. They have created six albums; The Foundation, Uncaged, Welcome Home, You Get What You Give, Jekyll + Hyde, Greatest Hits So Far. Their music resonates with me because they tend to sing about things they have gone through in life. One of the major themes of their songs is love. Love is shown many ways, and they just don't sing about loving another, but rather, loving all the little things in life. One of my favorite songs by the band itself is "I'll be your man", which is a song for daughters. He sings to his daughter in the song saying he'll be her man until she finds someone who'll be good to her and treat her how she deserves. The song fills your heart up with joy knowing that the bond they share is so deep. I myself, don't have a father, so this song gives me hope; that one day i'll find someone who'll love me just as much as a father should love their daughter. Overall, Zac Brown has beautiful control over his vocals, the musicians in the band all harmonize wonderfully, and this band can go into any genre and really win people over.

Above i have placed the link to one of Zac Brown Bands' social medias. I think this is a very specific way in which many celebrities use the power of media to stay in touch with fans. I think this is very influential and an amazing way to stay updated on the bands new arrivals and surprises.

Above is a link to a site where you can find a lot of information about the band itself. This page was produced by Zac Brown Band's fans, and then created this larger community; bringing everyone together. This page is described as a multimedia content, published by only the biggest fans.

Above is a link to a page entirely on information about all members of the band. Each one is directly from the member themselves and is meant to build a closer bond with their fans.

If you are interested in any music from this band: the link above will take you to their YouTube channel and the first video that'll pop up is called "Someone I Used to Know". I hope you guys enjoy their music and love as much as i do!
Posted by Morgan Grammer at 2:50 PM
Newer Post Older Post Home