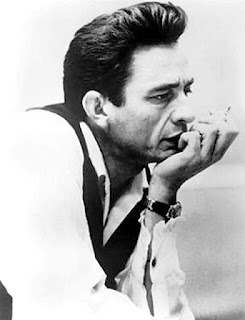 Johnny Cash was born on February 26, 1932 as Sam Phillips in Kingsland, Arkansas where he realized and began his love for music and had a major talent for it. Cash learned to play the guitar in Germany when he was serving our country and began to write songs. He later moved to Tennessee to pursue his musical career and by 1955, just five years after serving the military and moving to Tennessee he was already successful. I choose Cash due to his connection that he created with his audience through his songs, he created songs that not only connected with not just one group but everyone within a short amount of time. Cash did suffer from drug addiction in the 1960's but by the late 1968 he was back on track with a turnaround. What made him unique was recording a song within a prison that eventually changed the living conditions within jail. Cash was not only like everyone else, people knew that through the struggles he had faced in his career and how he came back in a positive way from his ups and downs within his career. He understood his audience and the audience understood him through his music. He had 13 Grammy awards, including a lifetime achievement award, 9 country music association awards and not only made it into the Country Music Hall of Fame but also the Rock and Roll Hall of Fame which is an amazing accomplishment.

Above is the link to the background information of Johnny Cash as well as his accomplishment throughout his career. This is the location of where I found most of the information in the paragraph above. It also talks about his struggles during his career as well as his successes and how he got there.

In the link above it provides a biography of Johnny Cash's life throughout his childhood to his death. It provides more detailed information on the songs and how he got to create them throughout his career as well as his marriage with a timeline of what happened and how he overcame those difficult times.

In the link above provides a video on YouTube of Cash singing Folsom Prison Blues and you can hear the employee and inmates of the prison in the background. I think this shows how Cash can make a mistake and then turn it into something good by providing a concert for inmates.

In the above link, you will read fun facts about Johnny Cash for example Johnny Cash is not his real name. It list about 10 facts that ordinary people might not know about Cash and how he was an author not just a musician.

The image above was posted by Yolanda Withaar on Flickr.