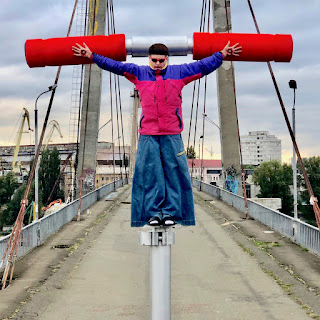 Oliver Tree is a young hip hop artist out of California who is bringing a new perspective to rap. I have seen him live twice in Seattle and listened to his music for a little over a year. He seems to create music that he loves and doesn't give much credence to the opinion of anyone else. With an over the top personality and outfit choices he makes this crystal clear to any nay sayers. With his against the grain model of creating art he has found a fringe fan base. His current tour "Ugly is Beautiful" has proven this. Oliver self booked a full nation wide tour and has sold out almost every venue. Recently having been to the Seattle show at the Crocodile it wasn't hard to see why. When he performs he draws the entire crowd in and has the entire venue screaming his songs. Much of his music finds its theme in something of realism which is why I think he will be greatly successful and his music is so profound. In the world of rap today there are millions of artists who are creating music talking about how they live lives much like that of the genres for fathers in NWA and Wu Tang. The sad truth tho is that the majority of these rappers are nothing more than 15 year old kids smoking weed and skipping out on class. They know nothing of killing or fighting for their lives against the police or other gangs. Yet in their raps they claim to do all that and more. Oliver knows who he is and what he does shows that in a beautiful way. One of his Songs "All That" speaks to the way that most of the people in the music world are claiming to be so much than they truly are. He makes a proposition to them to 'stop acting like your all that and go fuck yourself'. This is where as an outcast I think many people latch on to him because often when looking from the outside in it is so easy to see the amount of lies most people especially those who carry fame or power live by. If your someone like Oliver that can be an extremely angering thing because you are putting your most vulnerable self out but only receiving lies in response. I hope that you all like Mr. Tree as much as I do and thank you for reading my post!


Oliver Tree Music
https://olivertreemusic.com
This is Oliver Tree's official website where you can find his tour dates, music, videos and merchandise. A quick scroll through the website gives a good view into the craziness that is Oliver tree.

Oliver Tree Instagram
https://www.instagram.com/olivertree/
I think Oliver's instagram is a very important part of his musical persona. He uploads super weird fun videos that make his relatable and also chooses not to follow anyone. He will also give fans the opportunity to push him to drop new music more quickly by asking for comment or share pledges. Additionally through all of the negative attention he has gotten for being to out there he has never backed off of this personality and you can see this through his page.

Oliver Tree Youtube Channel
https://www.youtube.com/channel/UCHcb3FQivl6xCRcHC2zjdkQ
Finally I have posted this link to Oliver Tree's youtube channel. When listening to his music it is hard to completely understand Oliver's huge personality. I think that his music videos are a magnificent part of his creation of art and have played a big role in how successful he is. To truly understand Oliver tree music one must watch his music videos.

Thanks so much WWU art community.