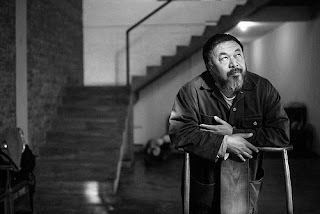 Ai Weiwei is an artist that I have actually learned about before in an art class.  He is known as being the most famous Chinese artist living today.  He is primarily an advocate for human rights in China.  Free speech is not a law in China, and Ai has paid for things he has said.  Police have beaten him up, bulldozed his brand new studio, and constantly spy on him.  China views him as a threat to their society.  Ai always stands up for the people of China, who get bullied by their government.  He goes above and beyond with his work to support the people, and do what is right, no matter the consequence.  One of his most known pieces is a segment where he would travel to all these different places and capture a photo of himself showing his middle finger towards a place, or person of power.  One reason he was inclined to start this movement was after an earthquake that killed thousands of people, and thousands of children at school.  The children all died, because the government saved money by building a school that was not stable, and far too easily collapsed on the children in the school.  Ai Weiwei wass outraged and started this movement.  Some people are not the biggest fans of Ai Wei Wei, but I personally appreciate the efforts he makes to fight for his people, and to fight for freedom. 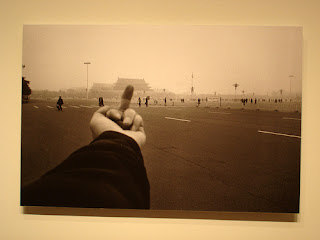 This is a piece of Ai Weiwei flipping off the Tiananmen square, which is a place of leadership in China.

In this website, there is a ton of information, and a real summary of what Ai Weiwei has done, and why he does the things he does.  It highlights some of his most important work.  There is also information, of key moments of his life as an artist.

This website shows a lot of Ai Weiwei's exhibition highlights.  There is also a decent sized biography about Ai Weiwei.  There is a ton of his work, with a small description on each piece shown.  Loads of information about him.

This last website is really cool because it shows a bunch of different things Ai Weiwei has done as an artist.  It also has a timeline that portrays all of his artwork.  I really liked seeing all of the work done in order, and knowing what came first.