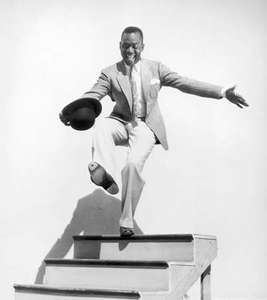 Bill “Bojangles” Robinson was born in Richmond, Virginia on May 25, 1878. He is an iconic African American tap dancer and actor. He was best known for his Broadway performances and film roles.  He started dancing at the age of five and starting performing at local beer gardens. He joined Mayme Remington’s touring troupe at the age of nine. In 1928, he starred in a Broadway musical, Blackbird, which featured his famous “stair dance”.  He became well-known for the nickname “Bojangles”, which meant for his white fans, cheerful and bubbly. Although he did some acting, he was best known for his tap-dance routines. He pioneered a new form of tap dancing, shifting from a flat-footed style to a light, swinging style that focused on elegant footwork. He was also famous for dancing with baby Shirley Temple, and videos of them dancing are very famous on YouTube. After his death, he remained a famous figure in history. In honor of his living, his birthday, May 25th became National Tap Dance Day.

This website shows the three ways Bill Robinson changed in the dance history. The three ways were a performed solo, Appeared w/o blackface, and finally, he danced with white actors. It broke the "rules" and restrictions on the black performers.

This website shows how Bill Robinson was a influential person in the tap dance world and history. He changed the black performer history.

This website tells us the life of Bill Robinson and what influenced him to be on media.


Here is a video of him dancing with Shirley Temple