Paik Nam-june has worked in a variety of media outlets. In particular, he is considered the father of video art as an artist who developed and created new art called video art. 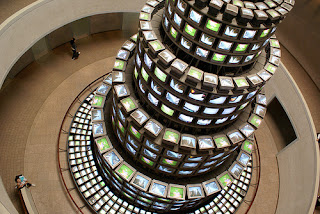 When I was young, I went to an exhibition with my parents. I saw many works of art by Nam June Paik, which really shocked me back then. Because his works seem to have something different from other artists as a child. The materials he used to express his work and his ideas had come to me fresh and vividly, and later, I found that he was a very famous artist.


Paik Nam-june, a young potential musician, led the Fluxus movement with artists from various fields. He then contemplates a newer art that combines performing styles. To realize his objections, he strategically selects TV. Television is supposed to allow the moving images of movies to be seen from afar without delay. Television's power was proven earlier through the relay of the 1936 Olympics in Berlin, Germany. Most importantly, it was a powerful force that greatly affected the values and ideologies of the group as a whole, with everyone in the short reach of propagation focusing on one channel. Prove it, TV sets exploded around the world at the end of World War II. Nam June Paik's first individual job was equipped with an engineer in a secret studio that even his colleagues did not recognize. At this time, his idea of using television was like a visual performance close to a digital instrument. As such, the characteristics of media art that encompass the popular concepts we encounter today are also being questioned in his first individual exhibition. 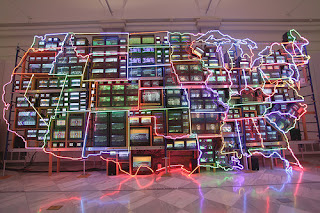 This is one of his most representative works which is named "Electronic Superhighway." It is made in 1995 by Paik Nam June, and it is exhibited at the Smithsonian American Art Museum.

http://www.theartstory.org/artist-paik-nam-june.htm
The website gives a good introduction to the story of his biography, divided into small sections. You can also check out his important works.

https://www.artsy.net/artist/nam-june-paik
On this website, you can check out his works by type and time period. You can see how his works have changed over time.

https://americanart.si.edu/research/awards/nam-june-paik/highlights
This website describes how he used various materials in his works. You can explore what the materials he used mean.