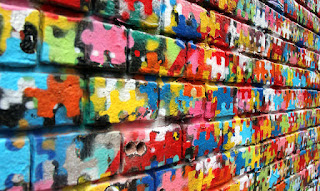 I chose Adam Burtle as my artist of interest. With strong ties to moral justice and activism Burtle created Info Bombing with the hope that it would cause people to stop and have further thought about the subject matter and to (hopefully) further engage themselves by looking up the information displayed on his info posts. He spray paints sidewalks and puts stickers on light poles, medians, dumpsters, benches, etc., in and around Seattle, stating statistical facts about race, poverty, paid maternity leave, and many other global health and social justice issues. I’ve found Burtle’s work to be interesting because it is an inspiring way to get people engaged, to pull us out of our media cocoons. While Burtle’s work is not truly “art” in the sense of a painting or performance, I think the ideas and motives behind it are art. It is a way to have people stop and have further thought about what the statistics actual mean and question their validity. it starts conversation!
The three links below are from Burtle’s Info Social Measures website. Some of the photos on the website, if you click on them, have further information about the statistic: where they come from, and why they are important.

(1)
http://measures.social/inequality/paid-family-leave/
The first link is a statistic regarding paid parent leave: “Only 11% of American workers are covered by a paid family leave policy for the birth of a child.” Burtle emphasizes that the many reason why this statistic maters is because, “the health benefits of paid leave are only accruing to the children of the most advantaged employees.”

(2)
http://measures.social/inequality/deaths-from-poverty-and-inequality/
The second link is a statistic that was published in the American Journal of Public Health in 2011. It draws light upon an economic issue – income inequality – that has been a grow concern in many countries, especially the U.S.

(3)
http://measures.social/inequality/american-birthweight/
The last statistic states, “American babies are twice as likely as babies in Estonia to be born at a low birth-weight.” I found this statement to be interesting when considering the economic differences between the two countries. It seems strange that babies born in the U.S. can still suffer from a pure problem like malnutrition when considering our advancements in technology and overall economic wealth.